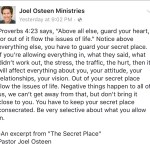 I find myself staring not realizing what I’m doing….wondering if things would just be easier. It occurs to me that it’s a sign that I’m suppose to be somewhere else or with someone else. So I stare and I daydream. Life would just be easier I tell myself never realizing that no matter what door I choose there will always be work to do on myself and on my relationships. Anything worth having is never easy but when we are tempted we don’t realize that the temptation is a sign that we are afraid of doing the work, not ready to do the work, or just flat out worried that we will do all that work and fail! And I’m still staring but now listening to his voice. Intently. Not realizing that even if I walk through that door…his voice is going to want to command me to do some work. Work….ugh. That’s the thing once you give into temptation the fantasy can only last for but so long. And at some point if you don’t want to end up alone you must acknowledge there is work to do. In that moment I snapped out of my thoughts, stopped staring, and went back to focusing on work. True work…

It was the moment I had been dreading for over a week! My breakfast guy had learned my face and memorized my order so well that as soon as I entered Flavors my order was already being prepared. No need to ever get on line because he knew I was a bacon (turkey is all they have…. -_-), egg, and cheese on a whole wheat bagel woman. But lately I’ve been wanting potatoes. Desiring a platter! He makes my food so quick and is so proud to serve me above everyone else that I dreaded telling him I needed a change. That for the sake of our relationship…I needed variety. Today was going to be the day! I had to speak up. But I was so afraid of offending him. You see when a man prides himself on knowing what a woman likes and providing it to her daily…depending on the man…any change in that routine could damage his ego. It was time to say something because I was now dreaming of potatoes! And if I couldn’t be honest with him….I may stray and start going to another breakfast spot. It was time! I had to be brave. The potatoes were calling! I swiftly approached his counter just as he was grabbing my whole wheat bagel and I informed him that I wanted a platter today. At first he seemed surprised but then he swiftly made my platter and handed it to me with a smile. He adjusted to my desires….easily for his desire to make me happy was greater than his desire to give me the same old thing every day. Now I’m staring at these fucking potatoes (way too much for me to eat) and wishing I had my bacon, egg, and cheese on a whole wheat bagel. Fuck my life. Lol. Sometimes I just want things because I haven’t had them in a while or ever. This platter is way too large for my liking! I’m overwhelmed. Note to self: must make up with the breakfast guy tomorrow and tell him…he always knew what was best ? ~KJM

On raising teenage children and not wanting to be a young grandmother: Only mattress that’s going to be squeaking in my house is me and my husband’s! Y’all don’t pay no mortgage up in here!

I’m still holding onto summer. Even though fall is whipping around me…I can’t let go of summer. That’s always been my problem though….holding onto things that don’t belong to me because of how they once made me feel.

I would like to be loved in the kind of way where nothing in my past could make me smile the way I do in my present and when I think of my future.

I met him on the first day of my junior year in college. We had Spanish 3 together and he sat right in front of me. Tall, good looking, and slender build so I figured he ran track but he was actually a wide receiver. I was immediately attracted to him but was currently doing what most college students do….looking for love in all the wrong places….which is also known as going through my bad boy phase. He became my Spanish oral partner and while we ended up spending a lot of time together….we actually didn’t start dating until a year later. I’ve been wanting to write you but just didn’t know if everything would come out wrong. Because who in the world wants to hear from their current loves ex factor? Lol. Here’s 12 things I really want you to know:

12. We were never in love with each other. I will always have great love for him and what he represents but we never had each other’s hearts. To be honest you may very well be his first true love!

11. I use to catch him watching movies on the Hallmark channel. At first I thought that was weird but now I know it’s the sign of a man with a big heart. Hallmark is now my favorite channel!

10. Even though he’s super quiet with the outside world, he was so talkative when it was just he and I. And he’s funny! I laughed the most with him! People never understood what brought us together and kept us dating on and off for years….most of that was laughter!

9. Your love was well respected on the Penn State Football team. WE ARE! PENN STATE! I had a friend on the team that never wanted me to date football players but when he found out about us…he said I couldn’t have chosen a better player.

8. Even as a young athlete at a Big 10 school, he was always a one woman man.

7. He opened doors for me (even car doors) all the time. It could be 2am and just us in a parking lot and he would open my door.

6. He’s the only man I know that can wear those West Coast Hawaiian shirts well! Does he still do that?

5. He taught me a lot about forgiveness. I am forever grateful for that. The kindness he showed me put him in a league of his own. It’s no wonder I tried to hold onto our friendship until 2012…..many years after we had stopped dating.

4. I’ve never looked you guys up but he and I still have mutual friends/associates in common. And I hear he’s so happy! I’m actually excited for you both. The journey that you guys have embarked on will continue to be amazing. I don’t know you but I know you are one of the luckiest women ever! Cherish every moment with him as I’m sure he is with you!

3. To date, he was the most romantic guy in my life. Once he drove from PA to stay with a teammate in NJ, to then pick me up in NJ but not without meeting my large West Indian family (shook my dad’s hand too), to only drive me back to MD where I was currently living so we could spend time together while he had a break from football! He did all this driving in the span of 3 days. I will never ever forget that!

2. He’s the reason why I love to cuddle. This man could hold me for days without being asked and without anything sexual happening. At first, I use to feel so uncomfortable because I had never experienced anything quite like that. It’s like he was holding all my broken pieces and slowly putting them back together because he wanted to! I had never felt so safe and so cared for. When you are young you think moments like that will always occur over and over. That’s so not true! I would give anything to feel that safe and secure right now!

1. His word was always his bond. To date, he is the only man I’ve dated that I 100% respect. I always knew where I stood with him and why. For years, he was my one that got away but in 2014, I realized he was just meant to be in my life for a season to give me a glimpse of what I deserve. When my pillow case is stained with tears, memories of the love of your life keep me going. Keep me having faith that there are good men out there. I wish you both nothing but the best! Continued peace, love, and blessings to you and the family you both will create one day (if not already). ~KJM aka the exfactor

It’s so important that we breathe life into one another. I had a friend tell me her dream and it was beautiful. So I told her to keep going and to remember that anything worth having will bring struggles but that she was more than built for this journey. #speaklife #breathelife #thenewkeepingitreal

I feel like I made the happiness up in my head. I’m creative that way. But I would never dare write pain into my story intentionally

What do you do when you’ve just accomplished a huge goal? Come up with a new one and then conquer that one too! Never stop improving yourself!